The Crane Wife by Patrick Ness 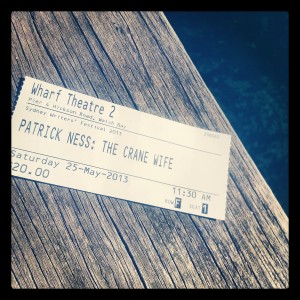 “Most fairy tales begin with an act of cruelty; gingerbread houses, someone abandons a child in the forest or whatever, but this one begins with an act of kindness — a man saving a swan.” Patrick Ness said of his latest novel The Crane Wife at the Sydney Writers’ Festival on the 25th of May.

Kindness is among many reoccurring themes in The Crane Wife, which Ness described at the festival as a “fantasia” based on a Japanese folk tale that he was introduced to as a child. In Ness’ tale, George, a mild-natured, 40-something divorcee, is drawn out of his bed in the middle of the night by a keening sound, that “tore at his heart like a dream gone wrong, a wordless cry for help that almost instantly made him feel inadequate to the task, helpless to save whatever was in danger, pointless even to try.”

But try he did, racing out into his back garden half dressed, to find a magnificent crane with an arrow shot through its wing. He helps it — it flies off. As this seems a somewhat an unlikely occurrence in a small back garden located in the outer suburbs of London, everyone George tries to tell about the crane suspects he dreamt it.

George goes back to his life managing a printing shop and amusing himself by making small, artistic cuttings out of old book covers. Until the striking, mysterious Kumiko enters his shop one day, and they begin a relationship.

As an artist, Kumiko collaborates with George by fusing his book cover cuttings with her elaborate artworks made of fine white feathers. Together they begin to make quite a lot of money.

Kumiko has an almost magical presence, even George’s daughter Amanda is somewhat mystified by her, though she is uncertain of the speed at which Kumiko and George’s relationship seems to be moving.

George is close to his daughter Amanda, who at the festival Ness described as “kind without being nice, which is so interesting to me.”

Amanda has a hard time connecting with others, mostly due to a tendency to say the wrong thing at the worst moment, and what George describes as a “slash and burn” approach to trying to find herself as she moves through life. I found Amanda to be a fantastic character; frustrating, heart-jerking but very real.

As time continues to pass, Kumiko remains mysterious, and George becomes greedy for more knowledge of her. He wants to be able to place her, he is upset by the idea that there seems to be so much more for him to learn about her, and she is evasive about her past, laughing:  “’I do not like talking of myself so much. Let it be enough that I have lived and changed and been changed. Just like everyone else.’”

The story is interspersed with another tale of a crane and a volcano in love, and the destruction that their love brings.

When he spoke at the festival last weekend, Ness said:

“When you fall in love you’re writing a story about someone and hoping they’re writing the same story about you.” Ness concerns himself with truth, stories and perspective heavily in this tale-within-a-tale, in which Kumiko explains to George: “’…Stories do not explain. They seem to, but all they provide is a starting point. A story never ends at the end. There is always after. And even within itself, even by saying that this version is the right one, it suggests other versions, versions that exist in parallel. No, a story is not an explanation, it is a net, a net through which the truth flows. The net catches some of the truth, but not all, never all, only enough so that we can live with the extraordinary without it killing us.’”

But George cannot bring himself to be satisfied with the story, to merely live with the extraordinary. The result is a tragic and moving, in this intricate novel that concerns itself with what it is to love, and how knowledge, power, possession and kindness interconnect with it.