Le Sueur’s account of the several years he spent working at a highly dysfunctional hotel in Tibet will be enjoyed by readers interested in visiting the country and it has some pretty funny moments. It has been dubbed Faulty Towers in Tibet by many, but for me this was, in part, its problem.

While Le Sueur comes to understand Tibet, he seems to get to know few Tibetans well. After all, he is working in a hotel populated by an ever-changing contingent of tourists and manned largely by foreigners.

Le Sueur gives a great account of what it might be like to run a business while dealing with the whims of the Communist Party of China, in a politically-charged atmosphere. This is sometimes interesting, but can become tedious to read about with lots of red tape and random, arbitrary decisions.

I find commenting on the short comings of non-fiction travel writing difficult, as it seems a pretty tall order to expect the author to bend the truth into some sort of narrative structure, when life is in fact often haphazard and meaningless by nature. But for me this book did feel like a lot of random occurrences strung together, and as a result I found myself fairly indifferent to whether I actually finished it or not.

Lunch in Paris by Elizabeth Bard 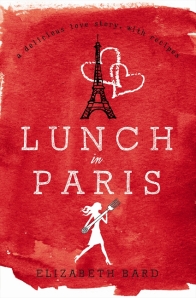 Bard falls in love, consumes delicious food and alternatively battles and embraces French culture in Lunch in Paris. A simple concept, but one foodies, travel buffs, romantics and the French crazed will enjoy. Each chapter is punctuated with several recipes, which I must admit, not being much of a cook, I usually skipped over.

An American in London, Bard begins a fling with a Frenchman – hopping on the Eurostar after work each Friday for a weekend in Paris. Eventually her romance with Gwendal becomes more serious, she moves there and they become engaged. Hilarious accounts of cross-cultural marriage incidents ensue:

“Gwendal is expanding his range in English. Although he is used to giving straight-laced scientific papers at international conferences, his colloquial English is a mix of spaghetti Westerns, Fred Astaire and early Beatles lyrics. One evening when I was making dinner, Gwendal decided to scrub down the bathroom. He emerged with a bottle of Ajax in one hand and a sponge in the other. “That was some dirty bathroom,” he said, leaning against the door like John Wayne surveying the landscape from the porch of a saloon…

I have to censor myself. I never noticed the way I spoke English until I had someone mimicking me like a parrot. My vocabulary is a disorganised closet full of fifties slang and phrases plucked from my favourite nineteenth-century novels… I’ll be on the phone… gossiping about an old friend. “I don’t know what she thought of him, but clearly he thinks he’s the cat’s pajamas.”

“The cat’s pajamas,” said Gwendal later that night. “Can I use that?

“Not unless you want to get your ass kicked.””

Lunch in Paris is not the book for you if you’re on a diet. It made me crave wine; a couple of glasses of it seemed necessary while reading about Bard’s journey. It made my stomach growl. It made me want to bake. The following is one of many passages from the book that provoked my hunger:

“When le dessert finally arrives, it looks like an innocent upside down chocolate cupcake, accompanied by a small cloud of freshly whipped cream. But when my spoon breaks the surface, the chocolate centre flows like dark lava onto the whiteness of the plate. The last ounce of stress drains from my body… the menu says Moelleux au Chocolat Kitu.”

Light, funny and mouth watering, Lunch in Paris is a satisfying trip through France.