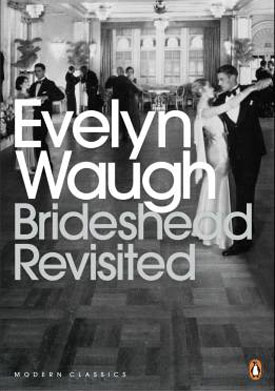 I finished Brideshead Revisited by Evelyn Waugh this evening and I absolutely loved it. Told from the perspective of Charles Ryder, it focuses on his relationship with  the wealthy, intensely Catholic Flyte family in England during the 1920s.

Ryder strikes up a close friendship with the troubled but lovable Sebastian Flyte at Oxford, whether this was a physical relationship or not has been hotly debated by critics, but from my reading of the book I’ve been thinking maybe not. I think the character Cara explained this well by saying something along the lines of it being a romantic affection between them common in English and German adolescent men and their fervent friendship being part of their development. She offers the opinion that she thinks these friendships are good, as long as they don’t go on too long. Although on the other hand maybe there was something homosexual to their relationship, as Ryder’s love for Sebastian seems to be the very basis on which his later romance with Julia is formed. But I like that it’s not clear, that it requires thought and some analysis.

Throughout the novel the different spiritual beliefs of the characters grind into one another causing conflict and distance. The house is almost a character in itself, sprawling and decadent, rebuilt from the stones of an old castle. I enjoyed the romantic, nostalgic tone of Brideshead Revisited, and as someone raised as a Catholic but who now identifies themselves as agnostic I found the religious themes particularly interesting and thought-provoking, especially as they were presented through the interactions between Catholic and agnostic characters because I can relate to each perspective. Evelyn Waugh himself converted to Catholicism and I think it’s interesting that, in spite of his faith, in this novel he has painted the Christian denomination in what I felt was quite a negative light for the majority of the story. But  ultimately the work is hopeful on the subject, while not being entirely positive, because (beware spoiler) despite the way religion dooms Julia and Ryder’s romance, the epilogue hints that Ryder has converted to Catholicism when he kneels down to pray “an ancient, newly learned form of words.”